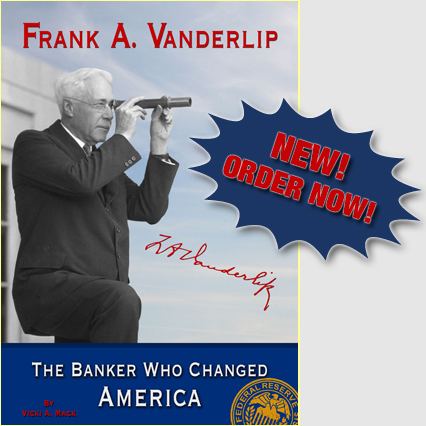 In a secret meeting on Jekyll Island, Georgia, a small group of bankers founded the Federal Reserve System just over 100 years ago.
Financier Frank A. Vanderlip was the only one of the men to write a first-hand account of the week that changed America's banking system.
From the day as a young farmboy, watching the repossession of his family's property, through his tenure as president of the country's largest bank, Frank Vanderlip gave great thought to the economy, corporate responsibility, and monetary policy. Understanding his background, his world, and his thought process at the time are all vital elements to learning the full story of the Federal Reserve and why money works the way it does today.
A busy man, Frank Vanderlip was also the founder of Palos Verdes, California; owner of the historic property known as Beechwood, in Westchester County, New York; an Assistant Secretary of the Treasury; and an early promoter of cultural and economic ties with Japan.
He lectured and wrote with thought and wit about banking, financing, education, and politics in the U.S. and Europe. His personal insights into men of his time, such as J.P. Morgan, are entertaining and amusing. His comments on public knowledge of business, corporations, and the workings of government are still as relevant as when he spoke them.
"Frank A. Vanderlip - The Banker Who Changed America", is the first full look at the story of his life. It is written with research from original journals, from newspapers of the time, and from his own books, including his autobiography, "From Farmboy to Financier".
Over 300 photos add depth and personality. Some of these have not been shown in almost 100 years.
Although Frank Vanderlip's life was uniquely lived, it can be universally understood. It's themes of bank failures, home foreclosures, labor unrest, and government corruption are timeless. It is a lesson and a study in success and power - how to get it and, more importantly, how to use it.

Vicki A. Mack is a photographer and author in Palos Verdes, California. Her previously published books include "The Groom's Guide - Almost Everything A Man Needs To Know," and "Up Around The Bend - Stories and Legends In Palos Verdes' Portuguese Bend," which she co-authored with Don Christy. She is a graduate of the University of Missouri School of Journalism.

Please visit Vicki's Gallery. Vicki has been shooting images of Portuguese Bend and other parts of Palos Verdes for many years. The images are available for purchase.
Read More

Please visit Vintage Gallery. Don Christy found a lot aerial images of Portuguese Bend when he was cleaning out the "cottage". The images are available for purchase.
Read More

"Up Around the Bend" is a personal history book by longtime resident Don Christy, written with Vicki Mack. Please email vicki@vickimack.com to order the any of the books.
Read More